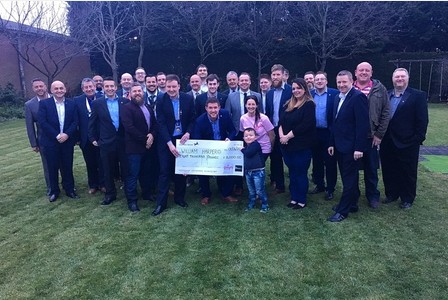 Fantastic News!!!! We have now given our first “Gift” to little William Harper and his family, in a joint donation with Nuneaton Roundtable.

William has just turned 4 years old, and his parents have been raising an enormous amount of money to fund an operation on his hand that would not be funded by the NHS, to allow William to travel over to America for the procedure to be possible.

Georgie’s Gift was able to donate £5000 to the family to help them achieve their goal for William. The Nuneaton Roundtable donated £3000.

William wasn’t affected by Meningitis but we believe that William and his family deserved a “gift” from us because of the pain and heart take that they have been through since William was born.

The story was covered by the Nuneaton News in a recent article here.

A ‘PERFECT’ first gift has been made from a fund set up in memory of a Nuneaton toddler – to help another youngster in the town.

Georgie’s Gift, the charity created in remembrance of Georgie Hall, has made its debut donation to the William Harper Fight appeal.

It was a tear-filled night when Matt and Paula Hall, who lost their ‘little princess’ to meningitis last year, surprised Samantha Farr and Paul Harper, William’s parents, with a cheque for £5,000 from their charity, as well as a further £3,000 from Nuneaton and Bedworth Round Tables.

The £8,000 gesture left Miss Farr and her partner lost for words and days on, they are still coming to terms with what they have described as ‘life-changing kindness.’

As featured in the News, William, who has just turned four-years-old, was born with a range of conditions including heart defects and renal anomalies as well as a disfigured club hand.

Unable to get help on the NHS, the youngster needs life-changing surgery in America, but this comes with a huge price tag, so his parents launched the appeal to raise the £64,000 needed to pay for it in the Nuneaton News.

The gesture from Georgie’s Gift and the Round Tables has taken the appeal to the £62,000 mark – a figure that has astounded the mum-of-four.

“We are lost for words, we genuinely can’t find them to say just how grateful we are,” Miss Farr said.

“It was an absolute surprise, we are very, very grateful for it. It has brought us to £62,000 and we have another £2,000 to come in so that will bring us to our initial target. But, foolishly, I didn’t take into account the exchange rate, so now we need to raise another £4,000-£5,000 but the support from Matt and Paula, and the round tables has taken so much pressure off us as a family.”

She went on: “I got really, really upset, that they have given money to help my son, who they don’t know, when they have lost their own daughter. It must have been really hard for them and brought so many bad memories back for them.

“It makes it even harder to accept the money, knowing the tears and anguish they have been through. It really touched me because two years ago they had their little girl and they never expected this would happen in their worst nightmare, so it is bittersweet that we accepted the money.”

The Hall’s compassion has gone much further than helping the appeal: “They have inspired me to set up a registered charity so that we can help other families who have been refused help by the NHS,” she added.

“It has almost pulled our family apart and I want us to be able to be in a position where we can help other families in the situation we are in.”

One proviso of the funding given from Georgie’s Gift is that £1,000 is spent on the family, and not on the appeal.

“It was an awkward position because people might wonder why we have the money when we still need money for the appeal but we are so grateful,” Miss Farr said.

“Our two older girls are flying out with us for the first surgery and we hadn’t planned on doing anything with them because we couldn’t afford to with passports and accommodation but this money means that we can treat the girls, their lives have been put on the backburner to William’s illness and often they don’t know how long I am going to be away in hospital for and this means that we can do something with them.”

Genuinely humbled by the Hall’s donation, Miss Farr simply summed up by saying: “The gesture of theirs will change my world forever. For all they have been through, I promise your donation to my son is going to add fuel to the fire. I will always do my best to help others, to show them the compassion all of you have shown us.”

Mr Hall said that they could not have thought of a more ‘perfect’ cause to make the first ever donation from Georgie’s Gift.

“We had heard about their story, mainly through the power of social media and Facebook so I contacted Sam, asked how much more they needed to raise,” he explained.

“I went back and spoke to the round table and explained what we were going to do in terms of Georgie’s Gift and both clubs decided to help.

“We asked them (Samantha, Paul and William) to come to our AGM, they didn’t know how much we were going to give them.

“I’ll be honest, there was a few tears, they were overwhelmed, I gave a little speech and I got a bit choked up, Paula was there to give the cheques, it was just a really nice evening, there was a real warm feeling about the whole night.

“We wanted to give something back to someone in our local community, people who have been so great in supporting us will be able to see that we are using their money to help others, children who need help.”

Miss Farr was keen to echo the sentiments about the support from the community: “It makes you so proud to be from our borough, it shows how caring and giving people are and how much they do for their community – both of our families know just how supportive this borough can be.

“I read that we have people on lower than average wages, some out of employment, but everyone gives so generously to help their own.”