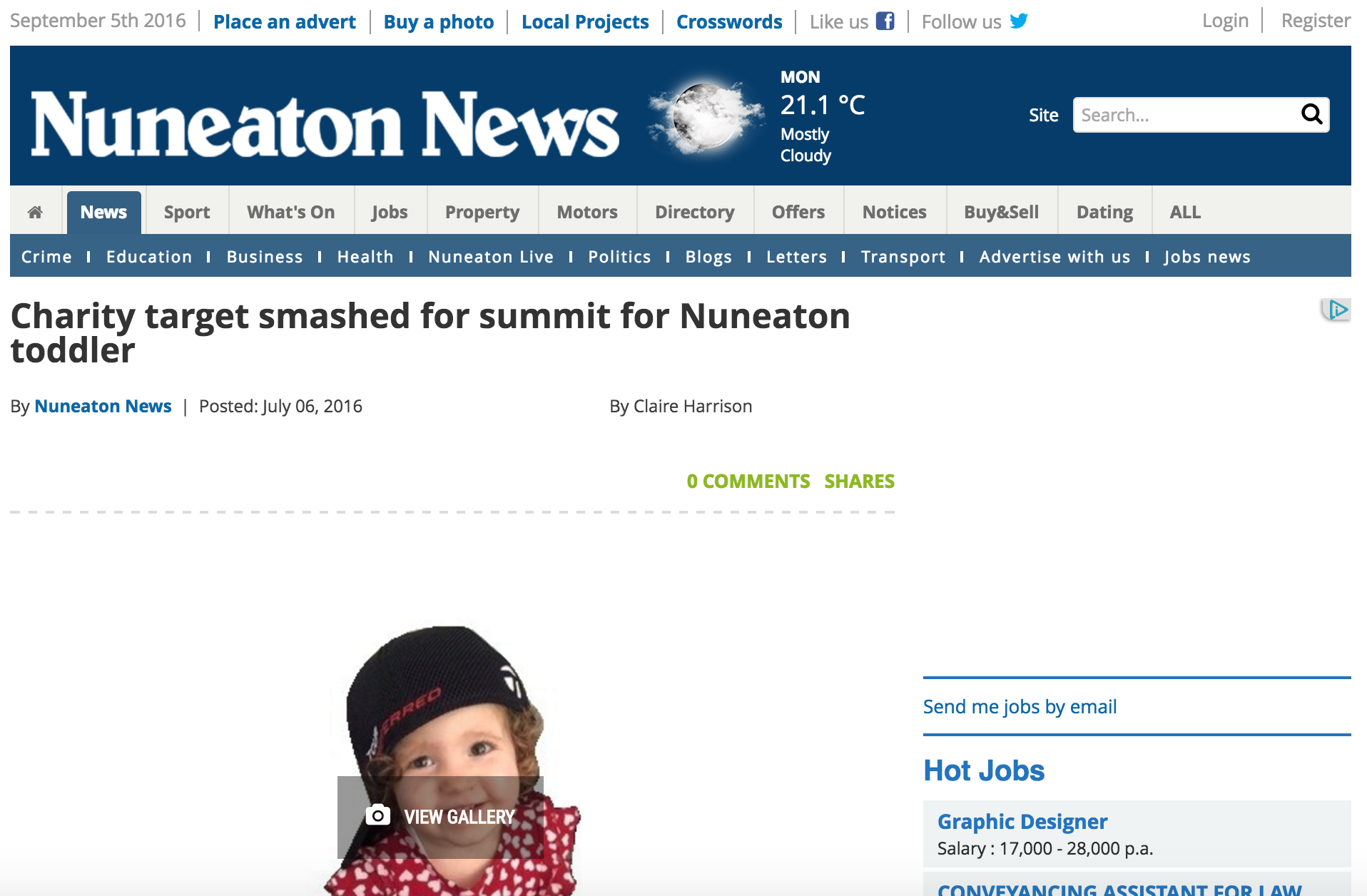 A FATHER’S pilgrimage to the top of the world’s tallest free-standing mountain to say ‘hello’ to his beloved ‘little princess’ will become a reality now that a £60,000 fundraising target has been smashed.

Matt Hall pledged to scale Mount Kilimanjaro so that he could be a ‘little closer’ to his daughter Georgie, who lost her life to meningitis just days before her second birthday.

Following a phenomenal fundraising drive, he and a band of 17 close friends will now make the journey to Africa in October to conquer the mountain.

By his own admission, Matt said that the £60,000 target was an ‘ambitious challenge’ but it has been smashed, three-and-half-months before they are even due to set off.

“It seemed such a lot of money, we weren’t sure how we would get there or if we would ever get that much,” he said.

“But we have, and it is incredible. When we get to the top, we will be a little closer to Georgie, I will get to say ‘hello’ to her, it will be nice,” he said.

Together with his wife Paula, Matt set up the charity ‘Georgie’s Gift’ as a way to raise awareness of the disease and to also help good causes on behalf of the toddler.

The mountainous mission, entitled ‘Georgie’s Trek’, is the biggest challenge they have organised yet.

And with the mission’s target already hit, they are hoping to make some sizeable donations to good causes too.

“Now that we have reached the £60,000 mark, it means anything else that is raised is purely profit for Georgie’s Gift,” the Adidas employee said.

“We are hoping that we will be able to make so many more gifts from Georgie, which is incredible.”

The final £15,000 needed for the grand total was raised in just one night – the first ever Georgie’s Gift Summer Ball.

“I don’t really know what we expected, before we even started we kinda set a target of £10,000, and we didn’t know whether we would get that amount so to have raised £14,813 in just one night is amazing,” he said.

“So many people gave their time for free, which saved us a lot of money, and the raffle raised a lot of money as well and then the auction we had just blew us out of the water, we had some money can’t buy gifts and so much money was raised.”

The Hinckley Island Hotel hosted the debut event and it was one to remember for many reasons according to Mr Hall: “It went far better than we had expected it to, it was such a great night and we want to thank everyone who came along and supported the event and gave so generously.”

Both Mr and Mrs Hall admit that, more than a year on from the loss of their daughter, they are still overwhelmed by the support they have been given.

The Summer Ball and the Guinness World Record attempt held at Ambleside Sports Club raised half of the £60,000 needed and then the rest has been made up of the climbers’ own personal fundraising and donations.

“It has been a great team effort, not just from the lads doing Georgies Trek, but also the whole community, I don’t think we will ever get over just how supportive so many people have been,” he said.

Many would be forgiven for thinking raising £60,000 was the hardest part of the challenge, but the real hard work starts now as Matt, his brother Chris and 16 other friends prepare physically for what lies ahead.

But before they embark on what will be a relatively mini trek compared to Mount Kilimanjiro, many of the Georgie’s Gift supporters will be at NunFest this Saturday.

“NunFest has chosen to raise funds for Georgie’s Gift, which we are really grateful for, and we will be there all day on Saturday,” the former King Edward VI College student added.