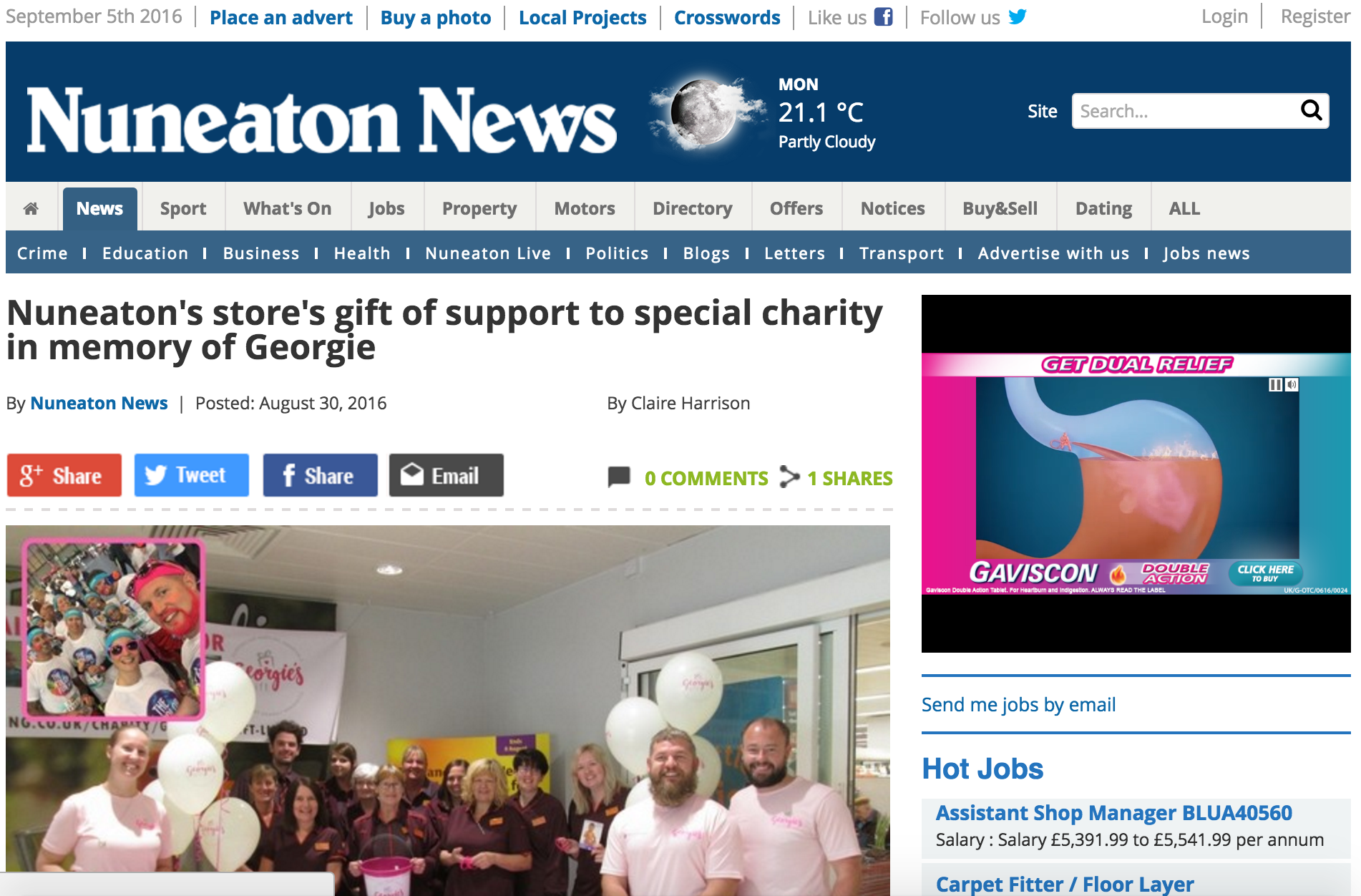 Phenomenal… more than £2,000 was raised for Georgie’s Gift in just a matter of days during the first of many events to be held at Nuneaton’s Sainsbury’s store..

YET more hometown backing has been given to a charity which aims to give gifts to good and needy causes in the memory of a much-loved toddler.

Shoppers at Sainsbury’s in Nuneaton have chosen Georgie’s Gift to benefit from a year’s worth of fund-raising at the store.

This year-long commitment got off to a flying start with just over £2,000 donated during a three-day collection at the Vicarage Street-based superstore.

Such support is particularly special for Matt and Paula Hall, who set up Georgie’s Gift in memory of their ‘little princess’ Georgie who sadly lost her young live to meningitis.

Mr Hall worked at the store for 16 years and for their charity to be chosen by customers and colleagues has touched their hearts.

“We are really chuffed, it’s quite personal for me as I worked there for 16/17 years, from college and my sister worked there as well and I still have a lot of friends at Sainbury’s, it was a big part of my life,” he said.

“Obviously because of this personal attachment, it is a bit more special, they know what we have been through and Kath, the HR woman, was my line manager when I worked on the check-out. So it was brilliant when we found out that we have been chosen as the chosen charity, we have got two dedicated weekends and we did a collection in the foyer at the start of the month.”

Both he and his wife were stunned with the response from the first collection: “It was phenomenal, really, really good,” said Mr Hall, who now works for Adidas.

“I remember when I did something in the foyer for cardiomapathy, and raised £250 , so for them to raise £2,000 I was gobsmacked.

“I would like to say a big thank you to everyone at Sainsbury’s as well as everyone who voted for us and everyone who keeps continuing to support us.”

Karen Carroll, store manager at Sainsbury’s Nuneaton, added: “We had a very successful launch for our new Local Charity of the Year, Georgie’s Gift. I’d like to thank all of our customers for their support.”

Being given yet more support continues to both humble and amaze the Halls, who are now focusing on what will be the last and most challenging big fund-raiser of the year.

As featured in the News, Matt pledged to scale Mount Kilimanjaro so that he could be a ‘little closer’ to his daughter Georgie.

Following a phenomenal fund-raising drive, he and a band of 17 close friends will make the journey to Africa in October to conquer the mountain.

They have raised a staggering £60,000 but the hard work is not over as the group are now in training for the physically arduous challenge ahead.

They fly out on October 18 and will start the notoriously-hard trek the next day: “We have a Whatsapp group and a lot of us have been doing something most weekends, climbing mountains so that we are as ready as we can be,” he said.

Despite smashing the fund-raising target, they are still hoping to raise even more money, so that more ‘gifts’ can be made on behalf of Georgie.

“We all have individual targets that we have set ourselves, and we just want to raise as much as we can.”

Their quest continues to be helped by the kindness of folk in the Halls’ hometown of Nuneaton.

They took part in the Colour Run with a group of friends and, this Friday (September 2), The Kicks are playing a gig at Ambleside Sports and Social Club and have pledged all of the proceeds to the charity. Also, during ‘Crows Fest’, the annual charity event at the Crows Nest pub on Saturday, September 17, the Georgie’s Gift team will be shaking collection buckets.